“What do an heiress, an actress and the Dalai Lama have in common? A charismatic, but problematic, self-proclaimed self-help guru named Keith Raniere. As the founder of NXIVM, a marketing organization focused chiefly on self-help seminars, he was arrested for sexual abuse, and his organization was designated a cult. A new HBO docuseries, “The Vow,” examines the rise and fall of NXIVM. Directors Jehane Noujaim and Karim Amer join us to discuss”

The similarities between NXIVM and Scientology are many. The reasons why members get involved and why they stayed involved. This is true for many self betterment groups. As was stated in the interview, people don’t knowingly go and join a cult. The reasons people get involved in these types of groups or any group for that matter are many. Self improvement, the need to be part of something bigger to help the world or mankind, having a community of like minded people and having connection, the list goes on.

We believe a critical point to keep in mind is that people join groups for a reason and are usually vulnerable at the time of joining. Where there are vulnerable people searching for answers, history has proven there will likely be someone at or near the “top”, an executive or manager of the group who are ready to take advantage and exploit! Prevention Education is key and the Only effective way to stop this epidemic of exploitation, manipulation and abuse! 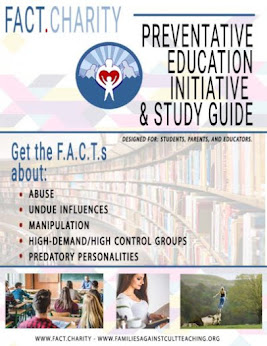 Help F.A.C.T. reach young, vulnerable adults before they get recruited into groups who manipulate and exploit! Your tax deductible donation can be made HERE